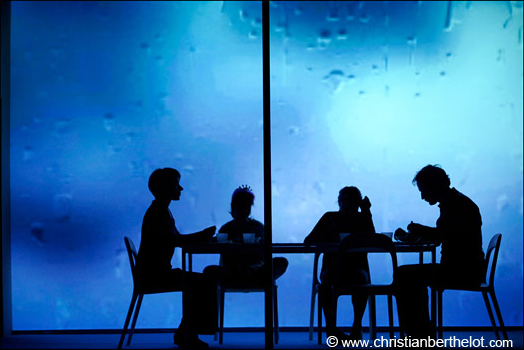 The translation, by Séverine Magois (who won a Molière in 2005 for her translation of The Browning Version), has been published by Les Editions théâtrales with the support of the Centre national du livre

This is an unmissable play… This is Lucy Caldwell’s first full-length play, but it has the maturity, thoughtful compassion and controlled theatricality of experience.
John Peter, The Sunday Times

Caldwell is spectacularly good. […] Caldwell has done a remarkable job of character creation, each one a totally credible, rounded individual; she also has an extraordinary grasp of the reality of suffering, as well as the triggers of self-preserving selfishness.
Emer O’Kelly, Irish Independent

Caldwell’s evocation of the imperviousness of depression to logic, and the heartbreaking isolation which results is exceptional, as is her understanding of the relationship between siblings in their most tender and vulnerable years.
Mary Coll, Irish Independent

[A] strikingly mature work, both upsetting and, in the end, uplifting.
Quentin Letts, The Daily Mail