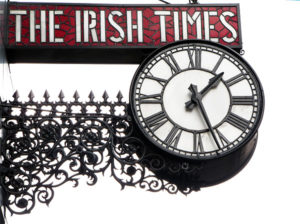 Multitudes by Lucy Caldwell is September’s Irish Times Book Club selection. The Belfast author’s short story collection, published by Faber in May, was described by Young Skins author Colin Barrett in The Irish Times as “a lively, humane book, gritty but wholehearted, and it offers an ultimately optimistic, progressive vision for the city of Belfast and the women who come from there, while never forgetting what has come before.

“Caldwell is not a writer who cultivates bleakness for its own sake, and the tone that ultimately prevails throughout Multitudes is one of tentative defiance, of a kind of celebratory bittersweetness and a refusal to finally bow to adversity.

“Set almost entirely in Belfast, featuring a succession of young female protagonists, and ordered in rough accordance with the the narrators’ ages, the stories in Multitudes collectively work as a sort of kaleidoscopic bildungsroman, tracing the archetypal milestones and tribulations of the various characters’ lives as they come of age in the city in the pre-Good Friday Agreement era.”

The Sunday Times review said: “Anyone who thinks adolescence is a happy experience should read Lucy Caldwell’s Multitudes, a series of stories about girlhood set mainly in Belfast around the time of the Troubles. Thirteen is a memorably grim tale featuring a miserable birthday party and a near rape, but most of these pieces (in a book neatly structured so that the various protagonists are older in each one, adding up to a composite whole) have something bleak or queasy in them. Caldwell captures every last sob and spew in a book redeemed by its underlying resilience and exhilarating vividness.”

Kevin Power in the Sunday Business Post wrote: “While the Young Turks and Tukesses of Irish Lit are all about the linguistic fireworks, Caldwell writes an understated, conversational prose that never advertises itself unduly.